Can We Bring Back This Symbol? 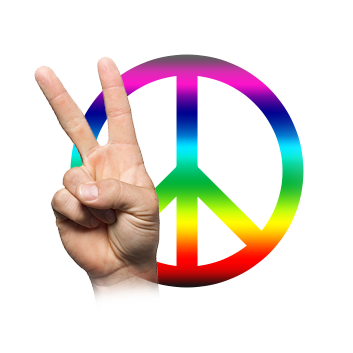 Remember this? It used to be a big thing back in the sixties.  Yes, people really did flash the peace sign and say, “Peace, baby.”  By that I mean people who wore tie-died tee-shirts, paisley head bands, and the same pair of jeans for three years. These are also people who often had placards in their windows that said, “Question Authority,” the Baby Boomer mantra.  In those days, this universal symbol of anti-establishment, anti-war, in-your-face rejection of the military industrial complex was thrown about by the baby boomer generation as a casual greeting, or a cooler way to say, “hi.”

Those of us Boomers on the tail end of the Viet Nam War were lucky not to see our contemporaries get their heads blown off, but many of us endured the pain as our older friends and relatives were sent off to fight a war they didn’t support in a far off land.  My brothers were lucky.  Mike was 4-F because of a badly broken leg, and Jack got a high lottery number.  My husband was not so lucky.  He was drafted and, as he puts it, they stole 2 years of his life.  He brags about successfully avoiding Viet Nam while in service, enduring Officer’s Candidate School (6 months of a fraternity hazing), serving as a Colonel’s driver in Germany, then being “punished” by being a mail clerk for his remaining time (he liked that the best).  He dodged a bullet, he knows it, and he’s damn proud of it.  Some of his friends from high school weren’t so lucky.

In light of yet another terror attack, I have a suggestion.  Let’s bring back the peace sign.  Perhaps Anonymous, the famous Hacktavists, can infiltrate the ISIS network and substitute these signs for these murderous sociopaths’ snuff videos. Does anyone who is not part of the military industrial complex really believe that you can wipe out an ideology with bombs and tanks? Don’t they understand that every act of “the war on terror” produces thousands of new suicidal recruits?  Why don’t we talk about the Viet Nam era anymore?  Why don’t we remember how misguided the Viet Nam Policy was and how wrong it is to continue with endless Middle Eastern wars?  Is it because there is no draft?  We now have an all-volunteer army which means that the children of middle and working class people, and certainly not the children of congressmen or the rich (with a few exceptions) fight our wars for us.

Maybe we don’t talk about our misguided military policies after World War II because we have a new bogie man, one that at least for now seems more frighting, more threatening, more elusive. Terrorism.  We were attacked!  9-11-2001! ISIS! Fear is a great motivator of the masses, and the masses bought it hook, line, and sinker after 9/11.  But what motivated our military policies in the fifties and sixties?  The domino theory!  The cold war!  Communism, the greatest threat to freedom! Will we ever learn?

To those who may contend that the threat of terrorism is far greater than the cold war era threats, I have this to offer.  On 9-11-2001, there were 2996 people killed and almost 6000 injured.  Since 9-11-2001, there have been exactly 45 deaths from Jihadist terrorism related incidents on American soil. http://securitydata.newamerica.net/extremists/deadly-attacks.html Since the War on Terror began to the year 2017, the United States has spent or budgeted $1.778 trillion.  According to thinkbynumbers.org, that’s more than $500 million per victim. And in Iraq and Afghanistan alone, we lost more than 6000 young servicemen.

Has it been worth it?  Has terrorism stopped?  At this point, it has simply spread to the European continent.  France and Belgium have basically ghettoized their immigrant populations and created cauldrons of marginalized Muslim communities where radicalization breeds in the vacuum of despair and poverty.  In the U.S. our greatest threat is the lone wolf, the American citizen who becomes seduced and radicalized online. Are Middle Eastern Wars preventing this?  I don’t think so.  Our actions in Iraq, Yemen, Lybia, and Syria have have done nothing to stop this madness, and many experts believe these actions have encouraged more and more radicalization. Richard Engel, the well respected NBC chief foreign correspondent who speaks fluent Arabic and has spent   two decades living in and covering the Middle East posits in his new book, And Then All Hell Broke Loose, that there may be a way out of quagmire if cooler heads could prevail.  Yes, the lunatics who want to fight and die need to be taken out.  But offering some type of exit plan for those who come to realize the brutal reality of ISIS’s nihilism needs to be found in order to install any hope of stability in the region. Continuing to depose dictators who bring brutal stability and tamp down radicalization has been a disaster that has unwound a century of lightly smoldering peace in the Middle East, a peace that was not great for the people living there, but certainly better than what we have now.  Engel believes that the Middle East is heading back to, unfortunately for its people, a new era of strong man rule which the people of the region may prefer to the chaos they now live on a daily basis.

Yes, I’m a fire breathing liberal.  I’m a dove.  There will never be a presidential candidate who doesn’t make me squeamish about his or her position on war and peace.  I’m reluctant to bash Hillary too much because she is the probable Democratic nominee, and, Heaven knows, I will not vote for a Republican.  But let’s be candid.  Hillary is a hawk who favors a muscular, interventionist military foreign policy and competes with the neo-cons to prove her “commander-in-chief “bona fides.  I found her speech before AIPAC this week terrifying. I have no doubt that if she is elected President (the probable outcome of this election), we will see eight more years of war with no end in sight. Hillary made it clear that she would abandon President Obama’s tough stance with the right-wing, war mongering Netanyahu in a heartbeat and forget about his rejection of UN policies toward peace. Worse than that, the current crop of Republican candidates are trying to out “bomb the hell out of them” each other.  The Donald’s speech before AIPAC was even more terrifying.  There was not a single right wing, war mongering talking point he didn’t pander to.  And he and Cruz diverted to the typical Muslim bashing xenophobia they live by as soon as the opportunity of another terror attack in Europe allowed it.  Bernie makes me more comfortable because he has consistently had the courage to reject the conventional wisdom that Democrats had to move away from their “peace-nick” past in order to survive politically. But his path to the nomination is getting narrower by the day. Rand Paul was less of an interventionist and far more consistent in that respect (and only that respect) with my views on war and peace.  But I couldn’t support him because he is, you know, Rand Paul.  (As an aside, how is it that a libertarian – which I am not – supports individual liberty and freedom from government, except for women because the government needs to be all up in our wombs?)

This election has barely touched the issue of war.  We’ve been in perpetual war for fifteen years.  Is the lack of attention to this issue because there isn’t much distance between what the media has decided is the probable Democratic nominee and all of the Republican candidates?  When the leading contenders in both political parties support the same policies with little distinction, the American people are left with a Hobson’s choice.  Since Hillary is winning the nomination of the Democratic Party, I can only assume that most Democrats want more war. That is clearly what she is offering. Is this really something the American people of both parties don’t care about?  I just don’t think that’s true.  Evidence of that is the “heads exploding” reaction to the Donald’s revisionist rejection of his previous Iraq War support and the failure of his polls to tank when he took W to the woodshed over these policies (No, I’m still not voting for Trump.)

I just don’t get it.  We need to bring the peace symbol back.